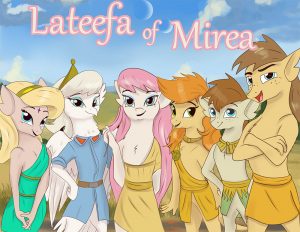 Since 2013 Summer Time Studios has been working on a series of ideas that would eventually become Jade Green’s literary graphic novel series “Lateefa of Mirea“.

This epic tale is the creation of Summer Time Studios Green Brothers over the years with both contributing to the characters, plots, and world building.  In 2019 Jade Green took the helm on its final development and has been writing and illustrating the series for its final release and publication.

“Within the Celestial Family of the Apsu there is a great world known as Tiamat.  As a blue and green gem Tiamat hovers in the heavens and upon Her lives the creatures known as the Tohn.”

The Tohn can be somewhat of an enigma existing between that of a wild beast and a civilized creature.  Being happy to live amongst the grasses of the vast plains of Mirea or to build small settlements and farm the land the Tohn are possessed with great curiosity and have a love of learning.  They could have a great civilization if they wanted to focus but their minds often dwell in the happy-go-lucky-silly-playfulness that exists in their hearts.  The Tohn also share the world of Tiamat with the macho yet kind ‘pig’ like Gonahein and the proud and noble Griffins as well as many other fantastic creatures.

The story of Lateefa of Mirea takes place within this world where we will follow Lateefa and her friends as she seeks to understand the Tohn and her place amongst them because although she is a Tohn she was raised among the Griffins.   Lateefa of Mirea is a Fairy tale Mythos having the levity and fantastic nature of a fairy tale yet grounded in the foundation of ancient Egyptian, Greek and Sumerian Mythos.

The first book is currently being illustrated and will be completed by sometime in 2022.