In the World of Orlen the country of Norrodor is a land undergoing a period of rapid evolution. Both technologically and culturally. Its races of beings once lived as hundreds of independent City States before the Dread Invasion from the North forced them to unite or die.

The three kingdoms of Hierdmok, the Foughtana Common Wealth, and the Holy Kingdom of Vinistal emerged from the unification and lived in a constant fear of another invasion from the outside.  The peace between these three kingdoms, with none of them daring to spark conflict with the others lest it bring about another war, lasted for thirty Orlenian years.

As the three kingdoms eyes were fixed to the North little did they know that war is indeed coming. Not from the North but from the West – the Jirose Empire who’s new Emperor has unfinished business in the land of mist and mountains….

~ Journey with us into the realm of Orlen as the paths of mystery and magic unfold into timeless tales of reluctant hero’s, evolving characters with powerful intent, and heart driven themes that birth legends which deliver the witnesses to the doorsteps of their own personal journey through life. 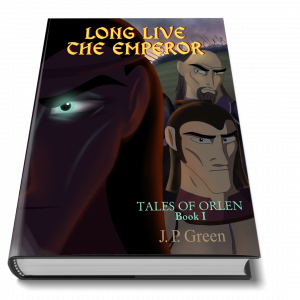 The time of the Jirose Empire is over. Torn to pieces by war and strife after the death of the last Emperor it is but a shadow of its former glory, never to rise again…Or is it.

Out of the shadows comes a mysterious heir to the throne. A master strategist, a cunning mind, a deadly leader…

But can he be trusted?

Long live the Emperor, Book I of The Tales Of  Orlen Series, offers its readers a glimpse into the complex art of war and strategy with its richly illustrated pages and engaging writing.